ANZAC Day is a commemorative day where we remember those we have lost, those who fought and of course those who continue to fight for our freedom. In addition to soldiers, doctors, nurses and all the roles of humans in war, we often forget about the role that animals played.

From mascots and messengers to transportation support, animals are put to many uses in war. Sometimes they have jobs to do: the horses, camels, mules, and donkeys used to transport soldiers and equipment, as well as carrier pigeons and tracker dog with their special talents. In addition, often animals are used as mascots and pets, or as symbols on badges and flags.

In the lead up to 2022, Proviro wanted to put a spotlight on the untold heroes of the war – that of the service animals who stood alongside our men and women – many of whom never made it home.

More than 16 million animals served during the First World War, including cats, dogs, horses, birds, camels and mules. They were mascots, provided comfort, carried messages, transported wounded soldiers to safety, and were instrumental in moving large quantities of ammunition, food and water, and medical supplies.

Images from the Australian War Memorial immortalise the loyalty and sacrifice of these animals. These are just a tiny glimpse into the way they supported their battalions.
Here’s an overview of the roles and responsibilities our four-legged mates made in past wars. 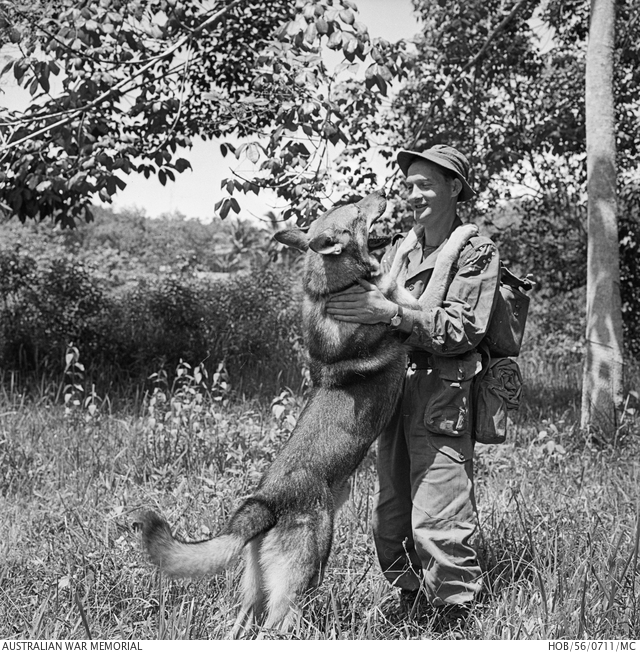 Sometimes dogs were used to carry important messages when telephone links or wireless failed. A message was secured in a canister attached to the dog’s collar. The dogs were trained to operate in the noise and chaos of battle, and they could move quickly around shell holes and through trenches. Teams of large dogs could be used to haul heavy equipment, such as carts loaded with a machine gun or ammunition.

Many dogs were adopted as mascots and pets.

Interestingly, it was tradition that military dogs were ranked one position higher than their handlers to avoid mistreatment. 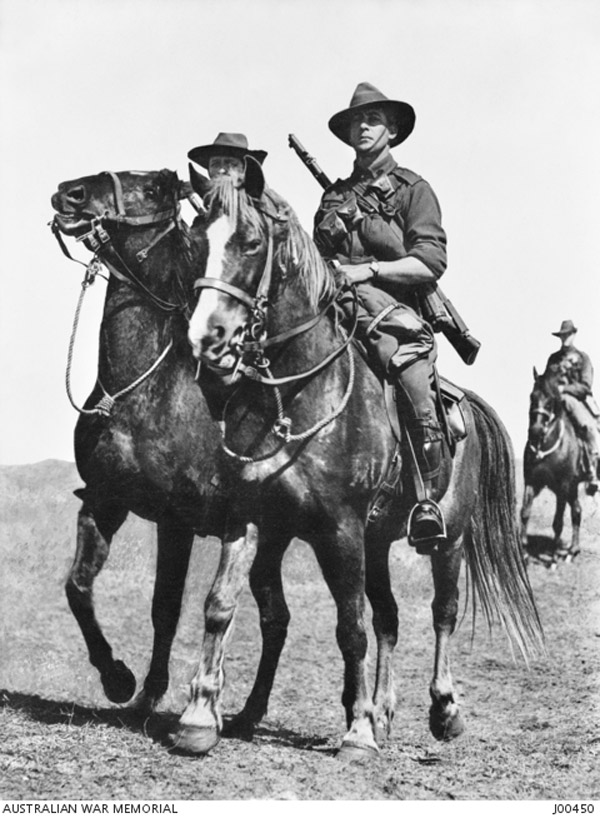 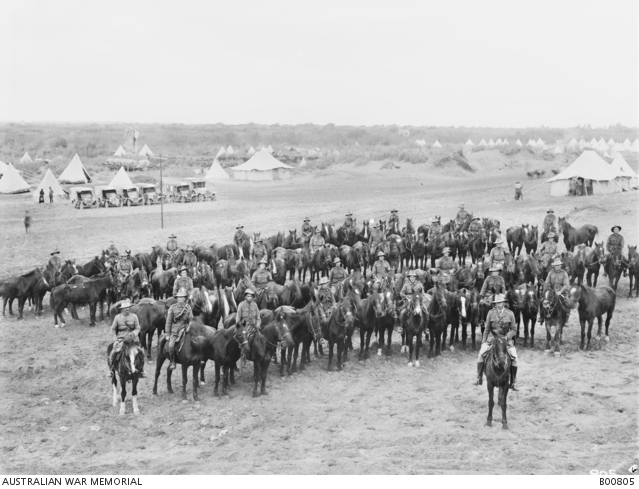 Horses were needed for the officers and many of the troops in the Australian Imperial Force (AIF) during the war. The Australian Government preferred to buy Waler horses because they were:

Most horses need about 30L of water per day, but a Waler in the Middle East could survive up to 3 days without a drink. They proved to be better than camels for quickly transporting troops to a battle.

Individual horses were selected for their ability to carry up to 120kg, day after day. This load included a rider, saddle and horse tack, rations for the horse and rider, a bedroll, clothing, rifle and ammunition.

While on the move, the horses were fed from a nosebag, a canvas bag filled with feed and tied over its head.

During the war, horses were used as transport to:

Australia shipped some 120,000 horses overseas during the war. More than 81,000 were sent to India. Over 39,000 horses served with the AIF, mostly in Egypt and Palestine with the Australian Light Horse. The AIF horses travelled by ship with the men. It took about 6 weeks to ship the horses from Australia to Egypt or England. Sadly some horses died on the voyage.

To prevent illness during transport, decks were kept clean, horses well fed and stalls well ventilated. The horses were massaged regularly to keep them healthy. In the port, they were often unloaded one by one using a crane.

The AIF sent more than 6000 horses to the Gallipoli Campaign in 1915 but most were returned to Egypt. The rugged hills and gullies of the Gallipoli peninsula more suitable for donkeys. 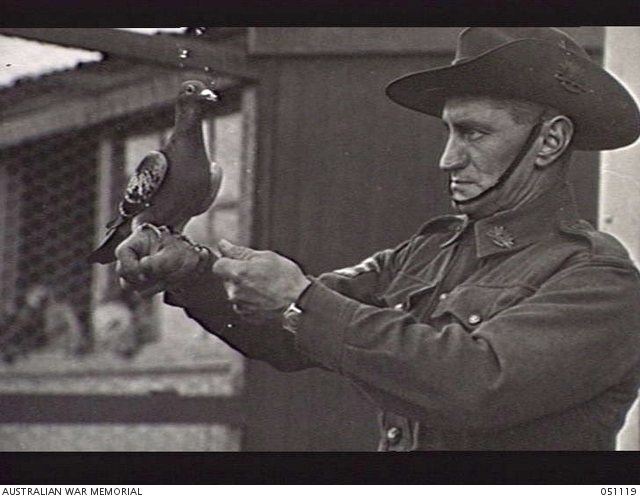 The pigeon is a hard-working military bird. Pigeons can fly fast over very long distances – without stopping – and they have very strong ‘homing’ instincts to help them find their way back home to their loft.

The Australian Corps Signal Company kept pigeons in lofts. The birds were delivered to the front line in baskets and released with messages on the situation. The birds would carry messages in small containers attached to their legs, or in small pouches looped over their backs.

When a pigeon returned to the loft, its message was secured and the valuable information was reported. Sometimes a message didn’t get back to base. Pigeons could be shot down by the enemy, blown off course in bad weather, or die of exhaustion. 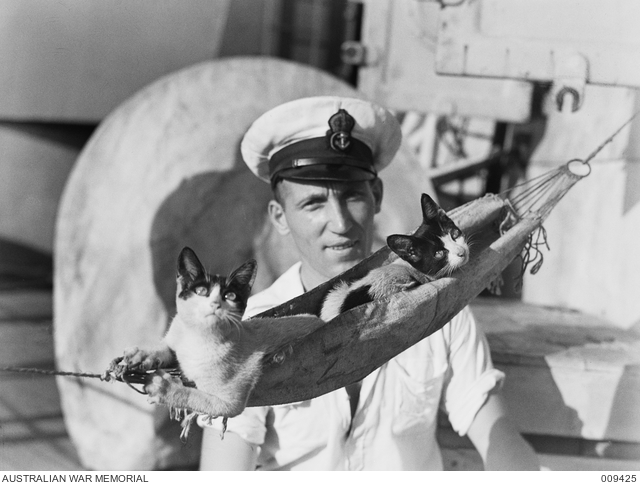 Cats have been war ship passengers for hundreds of years and were considered to be good luck for a voyage. Navy cats were initially recruited for their mouse and rat catching abilities to protect food stores but they also had the essential role of raising morale. By WWI, cats and kittens were mascots of not only ships but infantry regiments and air force squadrons. The mascot of HMAS Encounter was a kitten who would sit inside a large naval gun.

During the war, animals were used by warring armies because of their unique ability to undertake tasks that were difficult or impossible for humans. Over challenging terrain, they carried messages and transported equipment, people and supplies. They also helped to find people and save lives. Unfortunately, many animals suffered and died as a result of the war.
Let’s take this opportunity to say, we remember them. Lest we forget.